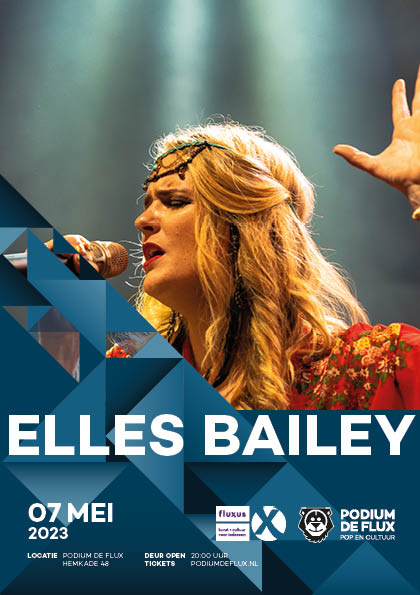 UK Song of the Year 2020 Americana Awards UK Album of the Year 2020 UKBlues AwardsArtist of the Year 20/21 UKBlues AwardsNominated for ARTIST OF THE YEAR 2022 Americana Awards UK To an ar'st without the crea've energy and laser-focused determina'on of Elles Bailey, it could all have been very different. But when you're one the hardest-working women in blues, rock and roots, not even the tumultuous world events of the past few years can stop you from wri'ng several new chapters in a remarkable story.Elles Bailey, the smokey voiced, human dynamo who has powered her way to the forefront of the Bri'sh blues and roots scene in recent years, finally unveiled her eagerly-awaited third album ‘Shining in the Half Light’ in the spring of 2022. Crammed with vibrant originals brought to life with her A-list band, it's another significant step forward in a career already feted with awards and acclaim generated by her two previous studio sets, 2017's Wildfire and 2019's Road I Call Home.

This self-confessed ‘rolling stone’ con'nues to do everything she can to call the road her home. 2022 saw Elles play mul'ple high profile headline fes'val slots across the length and breadth of the UK and into Europe, taking to the high seas to play the Joe Bonasmassa - Keeping the Blues Alive at Sea Cruise, opening for Blues Legend Walter Trout and joining Don McLean on his 50th anniversary American Pie UK tour. Spring 2023 finally sees her able to do a full UK headline tour of Shining in the Half Light, play three exclusive co-headline shows with Chantel Mcgregor and headline Winters End Fes'val alongside Kris Barras Band and the Von Hertzon Brothers. She’s also heading out to Germany to open for roots rockers Kiay, Daisy & Lewis in April 2023. Miss Bailey really does call the road home & when she arrives near you, don't think twice, get there. A great evening and a long musical friendship will be waiting.